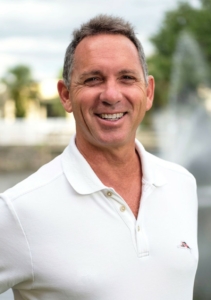 Tim grew up in the San Francisco Bay area.  At a young age, he began sailing, and racing small yachts in the Bay, then shifted to cruising sailing vessels up and down the US West Coast with his family.  At 18 years of age, he acquired his first Coast Guard License, then joined the US Coast Guard.  Tim Served for over 10 years, running patrol vessels and over 7 years running Motor lifeboats as a Surfman on one of the roughest stretches of water in the world “the Graveyard of the Pacific”.  Post Service, He shifted to commercial offshore operations and rose to Captain of Large Ocean Tugs and a Submarine Support Vessel.  In 2002, Tim Left Commercial work and began his yachting career.  He has commanded yachts up through 46 meters and commercial vessels over 87m in length.  He has 12 Transpacific Crossings, High Arctic operations, Panama Canal Transits, and years of time running the Caribbean and Eastern Seaboard.   His love of the Ocean is only matched by his love for travel, rehabilitating dogs, and spending time exploring the world with his Partner Martha.  He has 3 children and 4 grandchildren.

A 5th generation Floridian, Steve began sailing at the age of 9 and owned one small boat after another until his teens, growing up on the island of Key Biscayne off the coast of Miami.
He went on to join the Navy where he served in Surface Warfare positions working his way up from an Enlisted Recruit to retire as a Lieutenant Commander in a Carrier Strike Group. Steve’s naval career encompassed 12 years of active duty, and ten years in the reserves. It was during his reserve tenure in 1998 that Steve joined the yachting industry. He has since served as Captain of seven vessels and Chief Engineer on four.
A fun-loving and enthusiastic “team player”, Steve has now joined “Team Magic” and counts it as the highlight of his yachting career.

Ivan began his culinary career in 2001.     After graduating from the university in Mexico City, he began operations within his culinary focus at hotels including the Four Seasons.  In 2009, he stepped away from more commercial locations to chef and operate the Marakame Café in Cancun, then to a couple of other Restaurants in the region, developing his skills.  In 2012, he took over operations of a number of Seagoing restaurants for Holland America Line on their cruise ships.   This gave him focus on plating’s and creating meal programs for a large galley operation.

When Covid shut down operations with the cruise fleets, Ivan found himself in a position to narrow his culinary focus and enter yachting.

Once stepping aboard yachts, he has been able to take is commercial high end drive and bring it to a smaller, more intimate surrounding.  He has been involved with a number of yachts, and fractional vessels, where the galley has been non-stop, yet the creativity needed to remain high end.

Ivan looks forward to being apart of the Magic family and delivering “potions” of flavors and beauty to the clients aboard. 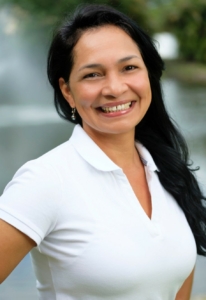 Martha comes to us from Panama. Growing up near the water in her hometown of Bocas del Toro, she was always close by the tropical waters of the Caribbean. When the opportunity arose for yachting, she was living in Panama City, and working in a Luxury Spa there. She joined the 53m Charter yacht Latitude as a very green stewardess, and quickly rose through the ranks over the coming two years to the Chief Stewardess Position. After a total of 7 years aboard Latitude in the South Pacific, Eastern Pacific and Caribbean waters and heavy charters in the waters off Tahiti, she moved on. She continued yachting, and after some freelance work for a couple of years, found herself aboard the 43m Yacht De-De. Instrumental with the supervision of a multimillion-dollar refit aboard, with subsequent heavy owners usage. During this timeframe, Martha met her partner Tim, and has been instrumental in the creation of great programs for her clients. In her off time, Martha travels, enjoys music, dance, and spends time with her Son, an Engineer in the yachting industry. 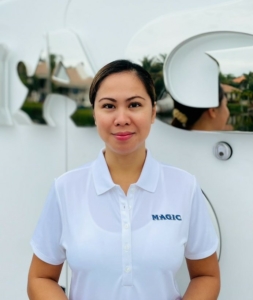 From the beautiful islands of Cebu Philippines, she had always dreamt to travel around the world… After graduating college with a Bachelors of Science in Commerce majoring in Banking & Finance, she pursued a short-term course in Elderly International Caregiving Program for the faith that this may led to help her achieve her dreams to work abroad. She was given the chance to enter yachting 9 years ago and started traveling around the globe. She loves working with people and providing excellent professional service. It was in her childhood that she discovered the love for God, people and traveling! Her hobbies include going to new places and taking pictures of the scenery and walking outdoors. She also loves cooking and singing. If it’s her off time (in the Philippine Islands) you will find her doing outreach program for the less fortunate children and elderly in the community as well as visiting sacred places to pray with her family and educating the Filipino populous on financial advocacy. Her love for God & her family are what she values the most.

About to drop the hook… Bio coming soon.